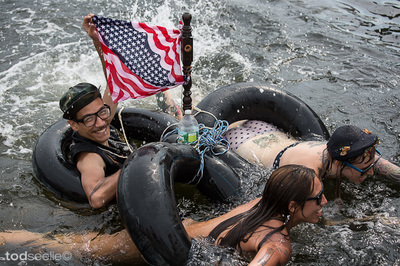 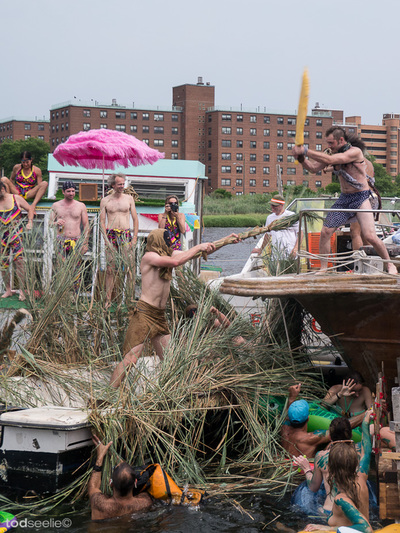 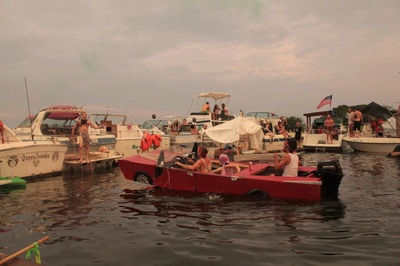 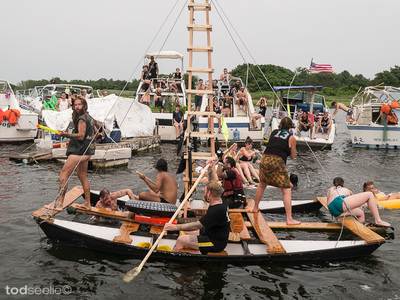 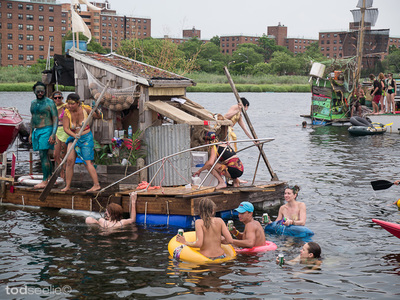 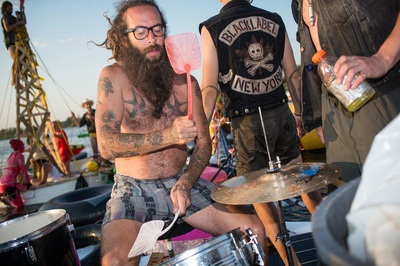 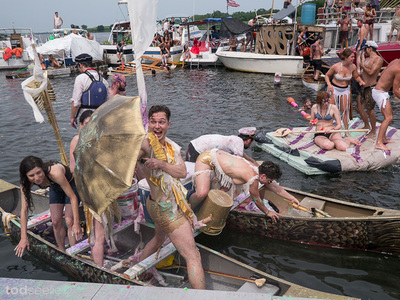 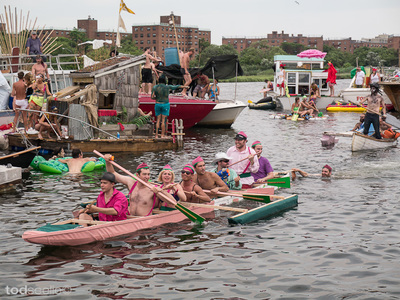 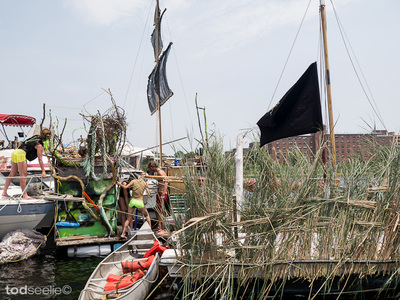 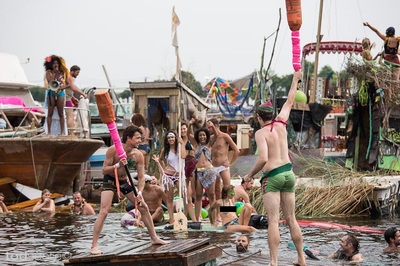 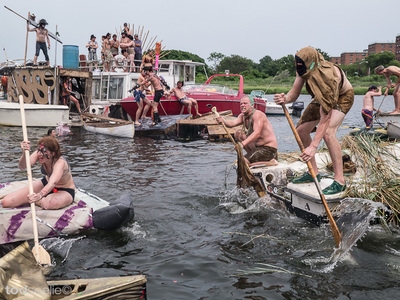 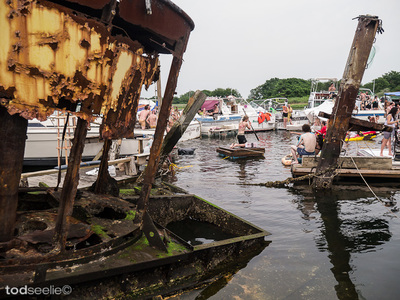 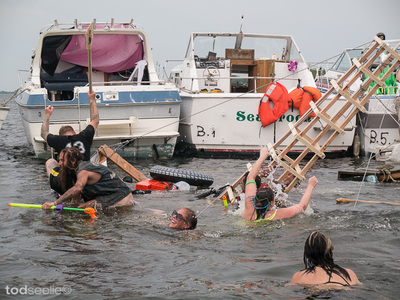 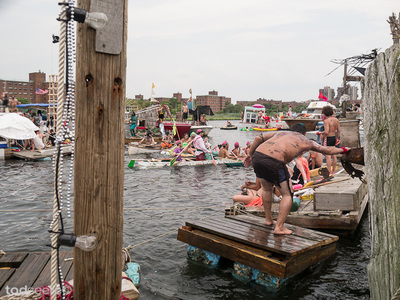 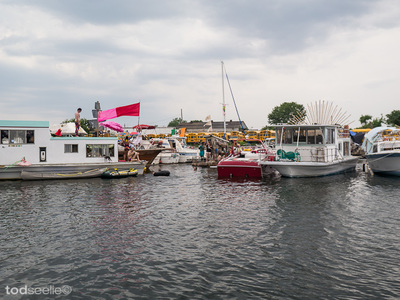 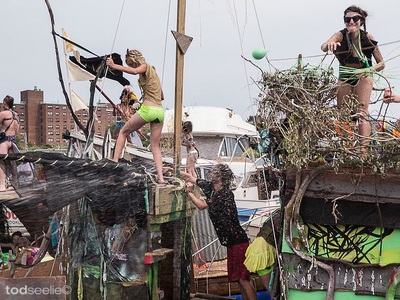 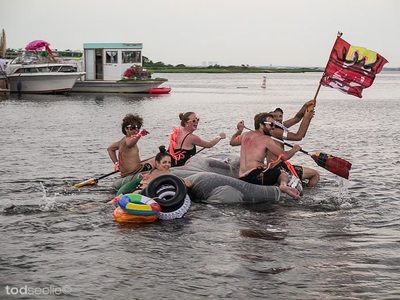 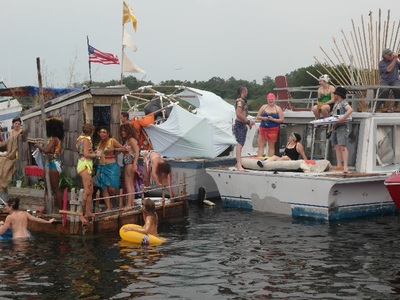 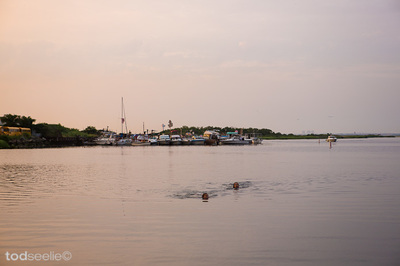 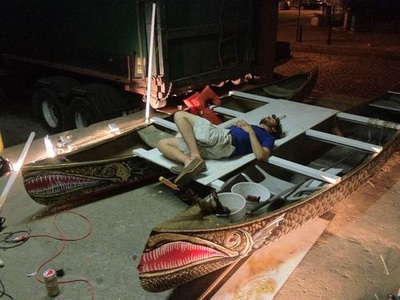 Please appreciate that the following information is entrusted to you with the utmost confidence. We must insist that you do not repeat any of this to anyone whom you do not know and trust personally.
Life springs anew on Mau Mau Island, the blood-stained froth that lapped at her shores is but a faded memory. Oceans of time have passed without the cry of the horn or the battle drum. But from this eerie calm awakens a new challenge and again people of substance must rise to face what can only be described as the greatest naval battle of all time….Again.
You are challenged to form gangs and construct experimental watercraft to participate in….THE SEVEN CHALLENGES
Seven challenges that will test ten thousand years of nautical engeneering development and the absolute mental and physical limits of human endurance.
Robber barons and warlords of the eastern bay have formed a loose alliance under the Pirate Queen Lamar for the construction of a horrific machine, an affront to all that is decent, a massive colosseum ATOLL that consumes the lives and souls of men. The gates of her impenatrable floating fortress will open for one single day.
Swimming Cities collective has negotiated an organized a challenge with the Pirate Queen starting dawn of July 7th. If you are reading this, it is your divine duty to rally a team and assemble your boat at the imfamous Somerville Basin in the Bay of Jamaika and prepare .  Queen Lamar has offered sleeping quarters within the bowels of the debuacherous ATOLL for the nights of Fri July 6 and Sat July 7th. Her ferry barges will assist in trafficking gangs and boats to and from the ATOLL. The bounty of her seas, shrimp and Miller High Life shall be offered to you. Come down from the hills and valleys, from your lands near and far, to where earth meets the waves with your hearts swelling in your chests… and face THE SEVEN CHALLENGES


ONE    SUMO WRESTLING           11 AM
Sumo (相撲 sumō)  is a competitive full-contact sport where a wrestler (rikishi) adorns himself in an absurd sweltering net of plastic bottles to achieve the illusion of obesity, and then attempts to force another wrestler out of a circular ring (dohyo). The sport has a history spanning many centuries originating in Jamiaka Bay it has recently gained great popularity in Japan after it was misconstrued as being part of cybergoth culture.

TWO   SWIMMING RACE             12;30  PM
At the sound of the conch shell, one representative from each gang will swim the gauntlet from livingroom barge to “THE GYPSY” and return to shotgun a can of Golden Reserve Lager.

THREE    REGATTA                           2 PM
It is a rare sort of person that stares into the abyss and sails into an unknown horizen to endure conditions and isolation that can drive a person to the brink of insanity.  Nearly one eighth of a mile through the bottleneck clusterfuck of infinite frustration, the No Wake marker of peril, and the bird sanctuary of unknown godlesss beasts to retrieve the Golden Egg and deliver it to Queen Lamar.

FOUR    BOAT JOUSTING           3:30 PM
The oldest representations of water jousting have been found on bas-reliefs dating from the Ancient Egyptian empire.  French crusaders and sailors awaiting embarkation for the Holy Land during the Crusades faced off in single combat mounted on small boats. Your team must summon its greatest warrior to be suited and mounted at the aft of a skiff.

FIVE    PUGIL FIGHTS              5:45 PM
This is the thing from American Gladiators where they stand on two columns and try to whack each other off with padded sticks.

SIX    ONE ON ONE BOAT BATTLES    7:30 PM
Queen Lamar will pit clan against clan in one-on-one duels lasting four minutes. Tournament style elimination until one alone emerges victorious from the chrysalis of carnage.

SEVEN    GENERAL BATTLE           9 PM
This should be somewhat self expalanatory. Brutally but respectfully destroy each other’s boats and collect your debris.

ALSO   NINE    TROPHY FOR STYLE
Don’t think were not rewarding for style under fire, so make it look good.it. 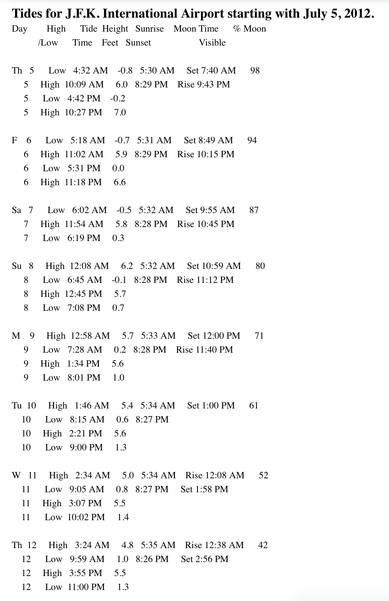